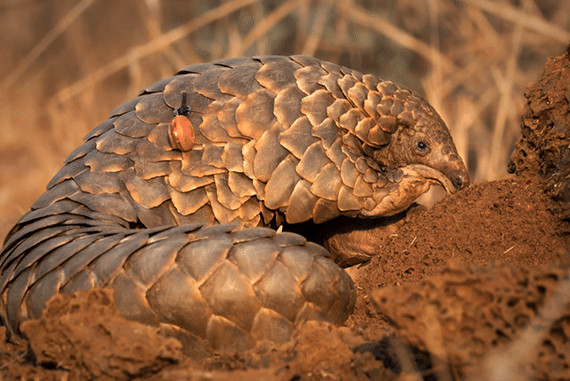 The African Pangolin Working Group (APWG) and The Boucher Legacy have worked together over the past two years, to protect and rehabilitate the most trafficked mammal on earth; the pangolin.

In previous blogs we introduced you to Corona and Rampfy, who were successfully released back into the wild and are both doing extremely well. The Boucher Legacy have provided funding for their rehabilitation and telemetry which is essential for post release monitoring.

We are now delighted to introduce you to Zambezi, the third pangolin that we have adopted.

Justice for Zambezi, the pangolin

It is nine months since a pangolin named Zambezi was retrieved in a sting operation at Kolonnade Retail Park on Zambezi Drive in Pretoria. In seeking justice for this pangolin, the APWG’s patience was rewarded, when they came face-to-face with the three accused traffickers in the Pretoria North regional Magistrates Court in August 2020.

A conviction of five years imprisonment and a R5 000 fine was cause for celebration amongst the team, despite the maximum sentence being 10 years or R10 million, as the highest sentence in South Africa so far is a sentence of eight years imprisonment for possession of a pangolin.

Sadly, wildlife crime is still a low priority in the courts and carries weak penalties even though this crime has surged internationally in the past decade, growing at two to three times the pace of the global economy – according to a UNEP-INTERPOL rapid response assessment. APWG has found that one does not always find a good prosecutor or a magistrate that is sympathetic to our wildlife’s cause.

Professor Ray Jansen, Chairman of the African Pangolin Working Group who has a background of 10 years’ experience in research, identification, retrieval, transport, treatment, release, monitoring and the state of the illegal trade in pangolins was on board to give evidence in aggravation of sentencing. Professor Jansen has assisted 50 pangolins in South Africa and given evidence in aggravation in more than 20 regional court cases pertaining to crimes involving pangolins.

There are four pangolin species in Africa and four in Asia that fall under the unique order of Pholidota. In South Africa there is one pangolin species resident, the Temmincks pangolin. It is unlikely, but not impossible, that a live pangolin from an Asian or African range state may end up being traded in South Africa, so identification of the exact species is part of the documented information that is included in the court docket.

Ray Jansen describes: “At the Sinoville police station, I was requested to examine the pangolin. In this process, I used analytical techniques to compare the characteristic features of the different species.”

African pangolins have no body hairs between their scales, while Asian pangolins have hair between their scales, with this fact Jansen could immediately confirm that Zambezi was an African pangolin. Within the African species, Jansen categorised further that he was not a giant ground pangolin because of the size of his scales, being 35mm to 60mm in diameter, rather than 60mm to 90mm, as is the case with the giant.

Zambezi also had a short snout, measuring 60mm in length, as opposed to the 100mm long snout of the giant pangolin. The white and black-bellied tree pangolins of Central and West Africa have claws on both front and hind feet, for climbing, and their tail is longer than the length of the body and is prehensile, used as an aid in mobility at 50 to 100 meters within the canopy of trees in rain forests.

Zambezi had clawless rear feet – with rudimentary nails only – and his tail was shorter than his body length. He was bi pedal (walking on his back legs with the front feet held slightly above the ground, freed for digging, while his tail was used for balance). This is specific to the Temmincks pangolin of South and East Africa as the only bi-pedal species. It was established that Zambezi was a Temmincks ground pangolin, found in South Africa and the bordering countries of Zimbabwe, Namibia, Botswana and Mozambique.

More than just a case number

Pangolin Zambezi is more than CAS 179/10/2019. Before he was poached, he had a territory that was familiar, it was where he was born and where he grew up. He lived peacefully and had no other threat to his life, besides man – the most resourceful predator. He was solitary and nocturnal, turning the soil as he spent his days quietly foraging in wild lands… perhaps he had fathered a few pups of his own. The world of loud voices, cigarette smoke, hard boots that shoved him to make sure that he was still alive; was terrifying and confusing.

Possession of a pangolin is a criminal offence

Zambezi had been kept in the trade for more than 12 days and was severely malnourished and underweight, at 9.8kg’s. He had sand and mielie meal in his stomach from licking the ground from hunger and in desperation. After two weeks in the trade, he would not have survived. He was removed from the boot of a car when his captors got pushed to the ground, handcuffed – no longer free men. 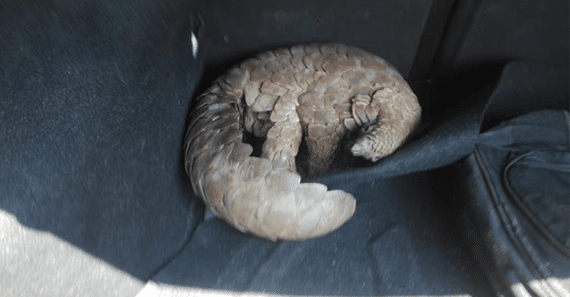 All pangolin species are specified as vulnerable, endangered, and critically endangered on the International Union for the Conservation of Nature’s red list. Being in possession of a pangolin is a criminal offence and Professor Ray Jansen and his close team of law enforcers are first-rate at taking down criminals and bringing them in. There have been 21 pangolins retrieved in South Africa so far this year, 9 of which were between July 9th and August 10th 2020, but this is considered only 10% of the actual illegal trade.

Pangolins have individual personalities. Regarding Zambezi, Nicci Wright, the director of both the African Pangolin Working Group and the Johannesburg Wildlife Veterinary Hospital, and a pangolin rehabilitation specialist, said that during his one-month rehabilitation process at the Johannesburg Wildlife Veterinary Hospital he was a “calm pangolin who basically got on with it and did very well”.

Zambezi was initially kept in high care, intubated with regenerative feeding formulas for slowly building up his weight. Once he had recovered a bit he was taken for natural foraging in secret locations in Gauteng.

It is impossible to know where a pangolin was poached unless the accused volunteers the information. Pangolins are specialist eaters of ants and termites and with ant species varying across territories, it is always a possibility that a pangolin may eat only the ant species that it is accustomed to in a specific area. This makes the rehabilitation of confiscated animals a challenge. Zambezi ate well on pugnacious ants – which are like the universal blood donor group O-negative – they are generally tolerated well by all.

A month after his retrieval from the illegal trade, Nicci Wright transferred Zambezi to Phinda Game Reserve in KwaZulu Natal, for his slow release into a safe area, under the authority of the Director of Biodiversity at the Department of Environmental Forestry & Fisheries of the South African Government.

The African Pangolin Working Group has partnered with select reserves in this area for reintroducing pangolins that have been locally extinct there for 40 years, a world first. It is an outstanding project that has attracted international acclaim for its accomplishments. Since 2019, seven pangolins have been released on Phinda; 5 have survived and flourished.

Releasing pangolins back into the wild

Previous releases, including early on in South Africa and in other countries such as the Philippines, the Democratic Republic of the Congo and Thailand had applied minimal post-release monitoring. Pangolins released immediately following medical treatment had a low level of survival for various reasons, including inability to adapt to their release sites.

“It’s wonderful to know that we’re bringing a species back to this area; doing something that’s never been done. In the beginning it was so time consuming – no tracking devices, long hours in the bush, taking responsibility for an animal on the edge of extinction,” – Charli de Vos

Charli de Vos is the ecological monitor for the pangolin project at Phinda. She has had mixed emotions about pangolins at Phinda. “It’s wonderful to know that we’re bringing a species back to this area; doing something that’s never been done. In the beginning it was so time consuming – no tracking devices, long hours in the bush, taking responsibility for an animal on the edge of extinction,” she says. “We’re all astonished at what’s been accomplished so far.” Improved satellite tracking provided by The Boucher Legacy, clocks in every hour that the pangolins are out of their burrows making for easier monitoring and less hours in the bush. 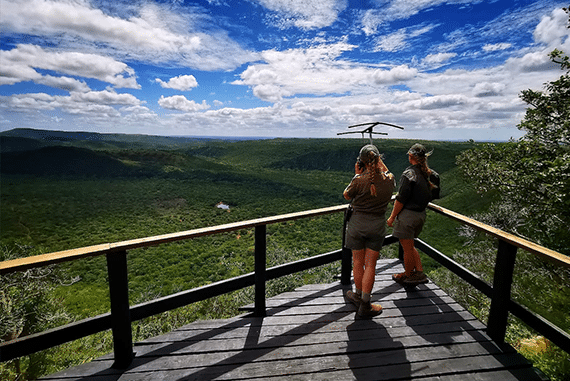 Stories of bravery in the bush

Charli explained how they lost one pangolin. “It was the wrong spot at the wrong time.” The Mzineme River has a high density of crocs and hippo’s “we think she was trying to swim across the river – with her soft underside exposed, it would have been easy for a crocodile to take her down.” The last signal they got came from the middle of the river. On land, pangolins can roll into a ball and are impenetrable to opportunistic attacks by predators, especially as adults with hardened scales. “We are giving them a chance at a new life, but the risks are still there,” she says. Soft-release pangolins in big 5 reserves acclimatise to local habitat on daily walks of three to five hours for up to three weeks before they are left to fend for themselves. It helps them to source suitable and sufficient ant and termite species for food and to understand the threats, sounds and smells.

Charli had observed how Rampfy, who was also financed by The Boucher Legacy, was being rolled around by an inquisitive leopard looking for food. The leopard finally gave up and walked off and an unconcerned Rampfy unrolled and carried on foraging. Rampfy’s behaviour has changed since his release; he has become a wild pangolin who doesn’t like humans anymore. He gave them a territorial hiss, which is what a pangolin would do if he was encountering another male. You may think that pangolins are entirely unaggressive, but they do fight for territories, wrapping their tails around necks and clawing at bellies.

Once, the Phinda team walked into a pride of lions who had been licking a pangolin. The lions backed off, giving space for the team to pick up the pangolin that was “covered in slobber” and to retreat slowly and steadily whilst looking at the lions. “Any situation with lions, on foot is a risk,” Charli says, sort of nonchalantly. 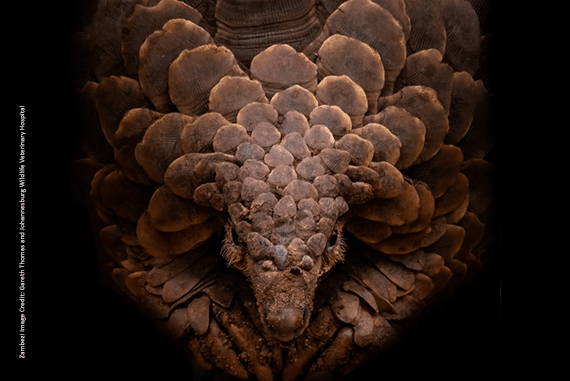 Zambezi was set free in a lovely open plains area with unlimited supplies of snouted harvester ants. One night after the Phinda team had finished weighing him, they walked back to their car and shined their torches straight into the eyes of a hippo. They were only 100 metres from their car, but when the hippo started chasing them, the woman ranger jumped into a tree and the two male rangers stood behind the tree. Luckily the hippo changed direction when they turned their torches off, and they were able to get back to the car and safely home to their camp for the night.

Eventually Zambezi decided he was a ‘mountain pangolin’ and finally settled in the Lebombo mountains in a conservancy next door to Phinda. From what we hear, he always picks the nicest spots – a home with a view. It was a place that humans would never go, possibly traversing hyena’s, but it is unlikely that even a leopard would get in there.

Zambezi is a perfect example of how a pangolin release should go.